Valerie is an experienced horse rider and owner who regularly competes at dressage. She has heard about LeadChange’s equine-facilitated learning, and wants to experience this new and different way of interacting with horses.

She is asked to lead a horse at liberty (no rope or head-collar) in a figure of eight around the indoor riding arena. She hasn’t done anything like this before and is working with a horse she has never met – but she believes that the task will be easy.

She achieves it without hesitation. Next, she’s asked to have the horse trotting with her around the arena at liberty. Her response is “That’s going to be difficult!”. She proves herself right by failing to get the horse to increase its pace from walk to trot.

After further attempts, she eventually has the horse trotting with her at liberty. We had no doubt that she could achieve the task, but the belief she held – that it would be difficult – became a self-fulfilling prophecy. 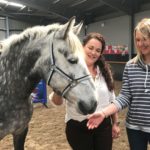 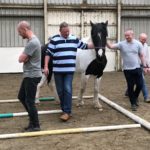 How horses changed my leadership